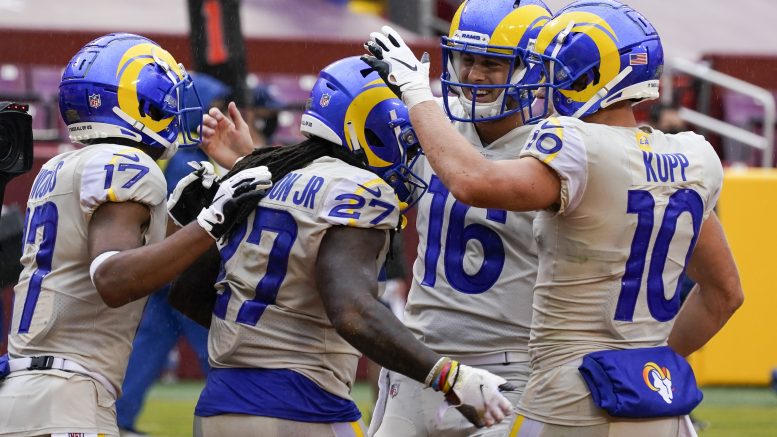 Los Angeles Rams' Darrell Henderson (27) is congratulated after runnig for a touchdown during the second half of an NFL football game against the Washington Football Team Sunday, Oct. 11, 2020, in Landover, Md. (AP Photo/Steve Helber)

We are at the business end of the NFL season, but even with just five weeks remaining on the schedule, predicting the winner of the Super Bowl is a tough task.

The Super Bowl, of course, is not just the biggest sports event in the US and one of the biggest in the world, it is a major betting event. Every year, millions of sports fans and bettors carefully study the markets from the Super Bowl matchup odds to the weird and bewildering props markets, and spotting the winner in December can be very rewarding. So, what do the stats tell us?

Points differential is a, perhaps surprisingly, effective way to get an idea about the potential Super Bowl winner. It is simple to calculate just deduct the points conceded in the regular season from the points scored. You can, if you wish, divide the total by the number of games played, to get the Points Differential Per Game stat, which removes any advantage for teams who have played more games.

Intuitively, that feels like a solid top five, and it also coincides with the current top five at many sportsbook sites, although the order varies.

Another informative stat that can be applied to a team’s regular season record as we try to predict the Super Bowl winner is a team’s winning percentage.

Translating that percentage to the 17-game season of the current NFL, a total of 10 wins in a season equates to only a .588-win percentage, while 11 wins give you a .647 figure. If we look for teams over .700 currently, then we have the following shortlist:

Four of the same names also crop up in this list, although the Minnesota Vikings have replaced the San Francisco 49ers.

The third stat to consider concerns what happened in the preceding season. It makes sense that a team that reached the playoffs in the previous season would be better placed to go on and win the Super Bowl the following year than a team that wasn’t good enough to get to the postseason.

The stats appear to bear out that theory. Again, looking at the last ten seasons, only two Super Bowl winners missed out on the playoffs completely in the preceding season. Three reached the Divisional Round, four were knocked out in the Conference games, and one was a beaten Super Bowl team.

The change to the postseason structure, extending the number of Wild Card games, means that it can be misleading to draw distinctions between different stages of the playoffs, but if we just stick to teams that made the postseason in the previous season, 80% of Super Bowl winners come into this category.

Do any of the teams on our two previous shortlists also fit this description? Yes! In fact, five of the teams mentioned above made the playoffs last season, the Vikings being the sole exception.

Among the many slightly frivolous stats about Super Bowl winners, there is one that might perhaps have some truth. The last five Super Bowl champions had their bye week in Week 10 or later.

There is some logic to the idea that a break in the second half of the regular season is more useful for resting players ahead of the playoffs than an early bye. Applying this rule to our previous candidates tells us that the two teams with the latest bye weeks are the Cowboys and the 49ers, whose byes came in the ninth week. So, there it is: the Lombardi Trophy will be heading to the NFC this season!